I looked into Manusmriti to find the answer. In verses 65, 67, 69-71 of Chapter 1 of Manusmriti, the description of Chaturyuga is given as under –

“65. The sun divided the day and night of the devas (gods) and of Men. The night is for sleep of creatures, and the day is for performance of works / duties.
67. One full year of men makes one day and one night of the gods. Northward movement of the Sun (Uttarayan) is their day and Southward movement (Dakshinayan) is their night.
69. The Krita yuga (Satyuga) consists of four thousand years; four hundred such years form the Sandhya and four hundred such years form the Sandhyansha.
70. Of the remaining three yugas, the duration of each succeeding yuga and its Sandhya and Sandhyansha, are respectively less than those of its predecessor by one thousand and one hundred years.
71. Twelve thousand years of such four yugas, as computed before in their order of enumeration, count as one yuga of the devas i.e. gods."

The use of expression, ‘day and night of gods’ in 1/67, considering 180 days of Northward movement of the Sun as their day and 180 days  of Southward movement of the Sun as their night, in some remote past was probably interpreted in the manner that these 360 days make one day and night of gods. Therefore, 360 human years were considered as equal to one divine year of gods. Consequently, by multiplying these 12000 divine years of Chaturyuga with 360, the duration of Chaturyuga was taken as 43,20,000 human years.

However, since the most ancient times many scholars and scientists have disagreed with this interpretation, which has been followed over the years without review/application of mind. More than 2500 years back eminent Sanskrit sage and scholar, Medhatithi had considered this an error and had put the duration of Chaturyuga at 12000 human years only. During last sixty years several scholars, sages and scientists have also held this view. Jaggi Vasdev Ji, Swami Sri Yukteswar Giri, Pandit Bhagwaddutt Satyashrava, Shri K M Ganguli, Shri Richard Thompson and many others, have written books/articles and delivered lectures explaining with justification this view of Yuga cycles.

Therefore, actually a Chaturyuga may actually comprise only of 12000 years. In addition, there have to be descending and ascending cycles of Chaturyuga, with some more years in between. This takes us to the completion of precession cycle by Earth in 25920 years, which is accepted by modern Astronomy! Even Glaciology supports this view and holds that this might be the seventh such Yuga cycle (seventh Manvantra?) going on.

Hon’ble Jaggi Vasdev Ji has explained the cycle of four Yugas saying, “The precession (caused by gradual rotation of the Earth’s axis) of the equinoxes is the period of time that it takes the Earth’s axis to pass through one complete cycle of the zodiac. It takes the planet 72 years to pass through one degree of the zodiac and 25,920 years to complete one full circle of 360 degrees. One half of the journey takes 12,960 years and covers the four Yugas. Satya Yuga lasts 5184 years. Treta Yuga lasts 3888 years. Dwapara Yuga lasts 2592 years. Kali Yuga lasts 1296 years. These four yugas taken together come to a total of 12,960 years.” Descending and Ascending cycles of Chaturyugas complete a cycle of 25920 years2-3. Sadguru Ji also relates these descending and ascending cycles of Chaturyugas to downward and upward movement of human consciousness. The good news is that he believes that currently it is Dvapara Yuga, and not Kali yuga, and that also in its ascending phase. Hon’ble Jaggi Vasdev Ji has explained this Yuga cycle connecting it with one complete cycle of precession of Equinoxes by way of following image - 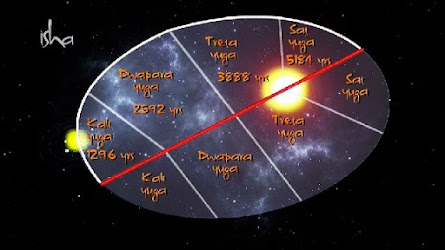 Swami Sri Yukteswar Giri has explained the 12000 years of descending and 12000 years of ascending Chaturyuga cycles by correlating the precession of Equinox with the mental virtues of the internal world4. He has explained that the Sun also revolves around a grand centre called Vishnunabhi, which is the seat of creative power known as Brahma, the universal magnetism. When the Sun comes nearest to the Vishnunabhi, which event takes place when Autumnal Equinox comes to the first point in Aries, the mental virtues are the most developed; therefore, that would be Sat Yuga. When Sun goes to the farthest point, it is Kaliyuga. As per Sri Yukteswar Giri, Autumnal Equinox was in the first point of Aries around 11501 BCE, thus human intellect was at its best at that time and thereafter it began to diminish. Therefore, by the end of descending Kali yuga in 499 CE (11501 – 12000), it was at its lowest. Thereafter there were 1200 years of ascending Kali yuga and currently it is Dwapara yuga going on.

Pic 57: The precession cycle of Vernal Equinox and Winter Solstice through the ages prepared by the modern day astronomers. 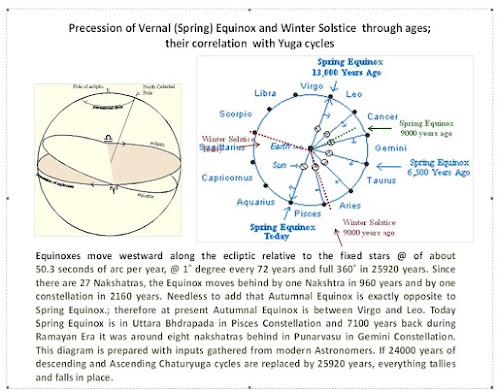 If we look at the principles of modern astronomy, these 12000 years of descending and ascending Chaturyuga cycles each have to be replaced by 12960 years each. 24000 years of Descending and Ascending Yuga cycles are to be replaced by 25920 years. The length of a year is to be taken of 365 days, 5 hours, 48 minutes and 46 seconds, instead of 360 days. Sandhya or Sandhyansh are meant to give flexibility to the number of years falling under each Yuga.

Eminent Historian Pandit Bhagwaddutt Satyashrava has recorded in his book titled ‘Bharatvarsh ka Brihad Itihas’ that the Era of Lord Ram was in the Sandhi period of Treta and Dwapara and this could be around 5200 years before the beginning of Vikram Samvat. He has also added that Shri Krishna was born towards the end of Dwapara and Kali Era started after his mahanirvan. This was around 3200 years before Vikram Samvat, thus giving a gap of just about 2000 years between Ramayan and Mahabharat Eras. Shri Satyashrava had emphatically added that “Treta and Dwapara Eras certainly did not consist of lakhs of years” 5. He has also given a very different explanation for elucidation of the gap between descending and ascending cycle of Chaturyugas, which aims at explaining the meaning of Devyuga alias Divyayuga and also aims at reconciling cycle of 24000 years with 25920 years. He has referred to the extracts from the text of Ramayan and Mahabharat, wherein reference has been made to Devyuga prevailing prior to Krityuga. He has also said that there could be some extra years between Descending and Ascending cycles5. It needs to be taken note that the dating of astronomical references in Ramayan and Mahabharat, done by making use of planetarium softwares, has proved his assertions correct. Ramayan astronomical dates relate the Epic to 5100 BCE whereas astronomical dates of Mahabharat relate the events narrated therein to 3100 BCE; a time gap of 2000 years6.

It needs to be taken note of that in all these ancient time-reckoning calculations length of a year was taken as 360 days whereas actually it is 365 days, 5 hours, 48 minutes and 46 seconds. This difference in the length of the year would also require adjustment in the length of Yugas. Further, if we accept the Chaturyuga cycle of 43,20,000 years, then are we prepared to declare that Kaliyuga consists of 4,32,000 years, of which 4,27,000 are still left? Are we able to explain what happened during 9,27,000 years, which would be the time gap between the eras of Shri Ram, who is said to have lived in Treta Yug, and of Shri Krishan, who lived in the end of Dwapara yuga?

We therefore make a very humble request to the sages and scholars to review the traditional interpretation of Chaturyuga and bring back Ramayan and Mahabharat from the realm of mythology to the realm of history, to which they actually belong. Only thereafter, we shall be able to make a rightful claim that India’s civilization is the oldest in the world during the current Holocene period and that Aryans were the originals of India who have been developing indigenous Vedic civilization for thousands of years.