In Rig Veda, the name of Sarasvati appears 72 times. It is described as a mighty river flowing from the mountain to the sea. In Mandalas I to IV of Rigveda, there are graphic details of release of huge water volumes from serpantine glaciers, which made the rivers flow with the blessings of Lord Indra. It is described as the Ambitame, Naditame and Devitame that is best of mother, best of river and best of goddess. It was the life stream of the people of ancient India, mostly in the Vedic and Puranic ages. Satellite imagery combined with geological studies and discovery of sites of Harappan civilization on the banks of Saraswati also indicate that it was flowing as a mighty river around 8000 years ago.

However till the middle of 19th century the river was lost. From mid 19th century onwards several geologists and archaeologists traced the palaeochannels of different phases of ancient Sarasvati River System. During last more than 150 years geological, archaeological, hydrological, ecological research reports and remote sensing images taken by LANDSAT (USA), IRS-1C (India), French SPOT Satellites (France) and ERSS (Europe), have provided scientific and credible evidence about the flow, migration and decay of Sarasvati River during its different phases.

These evidences remarkably corroborate the references to the origin, changing courses and disappearance of Sarasvati river system in Rigveda, Yajurveda, Ramayana and Mahabharata. Astonishingly these also match the astronomical dating of events in Vedas and Epics done by us, which relate to the period 7000 BC to 2000 BC.

Let us look at some very interesting instances -
In Rigveda, the Vedic Saraswati, is described as the mightiest river – “Seven sistered, sprung from three-fold sources” [6:61:12].  Again it is described as “Saptathi Sindhumata” i.e., mother of seven rivers strongly flowing and swelling in volumes (7:36:6).

Prayers are again offered to ten rivers including Sarasvati in Nadi Stuti sukta as under -“Ganga, Yamuna, Sarasvati, Shutudri (Sutlej), Purushni (Ravi), Asikni (Chenab), Marudvridha, Vitasta (Jhelam), Arijikya and Sushoma (10:75:5)”. (Imagine the knowledge of the geograghy of the scholars composing the hymns!

Mahabharata gives a clear geographical account of Sarasvati becoming a non-perennial river vanishing and re-appearing in the deserts [3:80:118 & 9:36:1], surviving in the form of a number of lakes e.g. Brahmasar, jyotisar, Kaleswar (in Haryana), Katasar, Pandusar & Ravisar (in Rajasthan).  Kurukshetra is described as located in the south of Sarasvati and north of Drishadvati [Mbh. 3:81:115]

Now let us compare these descriptions of Sarasvati River System in Vedas and Epics with the data collected from satellite pictures, geological studies and archaeological reports -

Three fold sources have been identified as -

More than 8000 years back Sarasvati was the mightiest river, having Yamuna & Sutlej as its tributaries and was flowing along the Aravalli Hills.  Due to northward movement of the plate of Indian subcontinent, tectonic upheaval of the Aravallis, a major earthquake around 3000 BC and climatic changes, Yamuna and Sutlej, migrated in opposite directions – Yamuna moved eastward to join the Ganges later-on. Sutlej moved westward and was flowing as an independent river upto the sea for hundreds of years and thereafter joined Beas, a tributary of Sind (Indus) River. Presently, Sutlej and Yamuna are the two perennial rivers whereas Sarasvati is ephemeral, visible in the form of paleochannels, trapped underground waters and ponds/lakes. Modern day Ghaggar rises in Morni Hills of Shivalik and meets Sarasvati at Rasula in Patiala Distt. Combined river now known as Ghaggar flows through Sirsa, hanumangarh, Ganganagar and Bhawalpur state of Pakistan.


Rejuvenation of Sub-surface Drainage after Bhuj and Haryana Earthquakes -

As discussed in the previous section, Saraswati drainages in Thar Desert area have disappeared due to climatic changes in 3000 BC. It has been observed that the sub-surface drainages (palaeochannels) in the Rann area rejuvenated after the Bhuj earthquake of 26th January, 2001, which might have been caused due to increase in hydrostatic pressure at the sub-surface aquifer condition.

Similar phenomena like sudden spurt of sub-surface water oozing at Kalayat village in Jind district of Haryana had been observed in December, 2005 (Bhadra et al., 2006) after earthquakes in the area.
The satellite picture shown also clarifies that as described in Vedas, Sarasvati river system was surrounded on one side by Ganga and its tributaries and on the other side by Indus River System (Courtesy: J R Sharma and B k Bhadra). 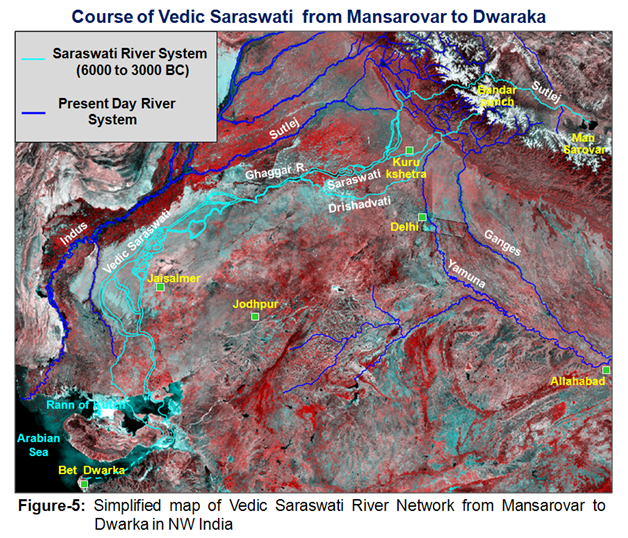 Out of more than 2800 sites excavated along Indus and Sarasvati river systems, more than 55% are in Sarasvati basin, but we still continue to call our ancient civilization as Indus civilization instead of calling it as Indus-Sarasvati Civilization! These sites include world famous excavations of Banawali (famous for world's first Acropolis), Kalibangan (known for its layout and designed floor tiles, Lothal (having world's oldest dockyard) and Dholavira (world's oldest huge Rock cut Reservoir and largest inscription etc. From these sites has been found evidence of cultivation of wheat and rice 7000 years back, copper arrow heads, terracotta, items of jewellery made of beeds, stones & gold, boats and anchors, drainage systems and warehouses, inscriptions and seals etc.


In fact Indus Saravati Civilisation flourished in more than 1 lac sq. km. area, covering Uttrakhand, UP, Haryana, Punjab, Rajasthan, Gujarat and Pakistan. It extended from Makrana in the West to Alamgirpur (UP) in the east, from Afghanistan in northwest and Manda (J & K) in North to Bhagatrao in Gujarat. 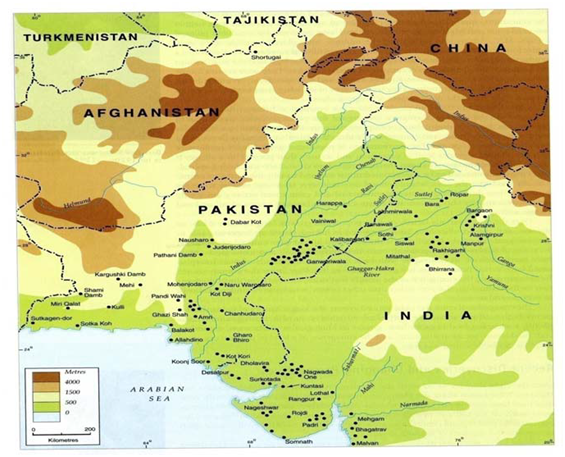 It is thus more than clear that world's greatest and oldest civilisation flourished around Sarasvati and Vedas, Epics, Smritis, Shrutis were composed long its  banks. Therefore even after its wane, the people kept on worshipping as Goddess of Learning and Ganga emerged as the new holy river.

Sarasvati in a sense is like modern India, having forgotten its heritage of Himalayan proportions, it has lost itself in a featureless desert! Nevertheless, it is still hidden and is capable of restoring the past glory.


Reverence for this glorious past is a necessary element of patriotism.  Allowing propagation of a false view of one’s own cultural heritage is not tolerance but self-betrayal!

1. Saroj Bala and Kulbhushan Mishra. 2012. Historicity of Vedic and Ramayan Eras: Scientific Evidences from the Depths of Oceans to the Heights of Skies. Institute of Scientific Research on Vedas. Abridged editions also available in English and Hindi.


2. Bhadra, B.K., A.K. Gupta, and J.R. Sharma. 2009. Saraswati Nadi in Haryana and its linkage  with  the  Vedic  Saraswati  River–Integrated  study  based  on  satellite images and ground based  information.  Journal of Geological Society of India, Bangalore, Vol.73: 273-288.


3. Michael Denino. 2010. The Lost River - On the Trail of the Sarasvati. Penguine Books